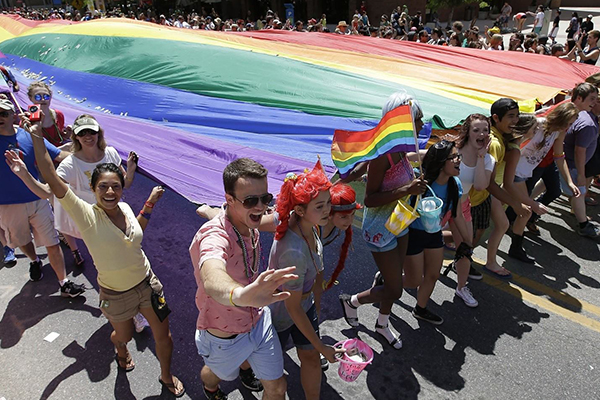 Originally written for the Gander by Keya Vakil.

“People who are different are not the reason that our roads are in bad shape after decades of disinvestment or that health care costs are too high, or that teachers are leaving the profession,” Michigan State Sen. Mallory McMorrow said during a speech on the Senate floor this week.

MICHIGAN—As Republican-led states rush to introduce and pass laws that roll back the rights of LGBTQ children and adults, a new Courier Newsroom/Data for Progress poll suggests some politicians’ efforts may be a step too far for voters.about:blank

Eighty-eight percent of likely voters believe the government “should not have a say in personal matters like a person’s sexual preference or gender identity,” according to the poll, which surveyed 1,155 likely voters across the country between April 13 and 17.

That finding comes on the heels of a massive number of anti-LGBTQ bills filed nationwide–more than 300 in 2022 so far. Even though transgender individuals make up only 0.7% of the population, about half of the bills target trans rights.

When asked about whether they generally support or oppose the laws, 48% of respondents— mainly Democrats and independents—said they opposed them. Forty-two percent of respondents, including 63% of those who identify as Republicans, said they supported such legislation.

“While politicians across the country continue to launch discriminatory attacks against an already marginalized population, they are doing so in defiance of the will of the majority, which stands in solidarity with the LGBTQ+ community,” said Cathryn Oakley, state legislative director and senior counsel for the Human Rights campaign.

Jay Kaplan, a staff attorney for the ACLU of Michigan’s LGBT project, agrees that these efforts represent a cynical political ploy from Republicans to raise money and stoke outrage among their conservative base ahead of primary races for the 2022 elections–at the expense of innocent kids.

“It’s the most cynical of political calculations because it’s targeting one of the most vulnerable populations, that’s LGBTQ youth, particularly transgender youth,” Kaplan said. “I find it pretty despicable.”

While voters narrowly oppose these anti-LGBTQ proposals, most have heard little about them. Only 28% said they had heard “a lot” about the proposed bills, with 72% saying they’d heard a “little” or “nothing at all.”

Meanwhile, the reckless and wasteful political ploy is having an impact on kids, who are watching politicians debate their very right to exist and be themselves.

“It does have a direct impact on LGBTQ kids and youth in terms of their mental well-being, as well as their safety and security going to school,” said Erin Knott, executive director of Equality Michigan. “You cannot take for granted the fact that these bills are helping to create an environment that’s hostile and intolerant and impacting our kids’ well-being.”about:blank

A January survey from the Trevor Project found that 85% of transgender or gender non-binary youth ages 13-24 and 66% of LGBTQ youth said their mental health had been negatively impacted by these legislative attacks.

Advocates also worry that this sort of anti-LGBTQ rhetoric and action can contribute to high rates of physical violence. LGBTQ people are nearly four times more likely to experience violent victimization than people who identify as non-LGBTQ—including rape, sexual assault, and aggravated or simple assault, according to a 2020 study by the Williams Institute at UCLA School of Law.

While anti-LGBTQ bills might play to the extreme conservative base, politicians who support them are taking a risk with the broader electorate. A plurality of voters (39%) said they would be much less likely to vote for a candidate who would support laws that discriminate against LGBTQ individuals in schools and place restrictions on transgender individuals.

Still, that doesn’t seem to be stopping Republicans.

James Craig—Michigan’s expected Republican nominee for governor—recently said that if elected, he’d push an aggressive “Don’t Say Gay” law for Michigan, based on a recently-passed law in Florida.

Florida’s “Don’t Say Gay” law bans any instruction of sexual orientation or gender identity in kindergarten through third grade, and any other instruction for older students that “is not age appropriate or developmentally appropriate for students in accordance with state standards.” The bill also prohibits “classroom discussion” of gender identity and sexual orientation.

Supporters of the Florida law claim it’s intended to give parents the right to determine when and how to discuss LGBTQ topics with their kids, but the rhetoric they’ve used to attack the law’s opponents—who are worried about its impact on young kids—suggests uglier motives. Florida Gov. Ron DeSantis stated that those who oppose the law “support sexualizing kids in kindergarten,” while his spokeswoman Christina Pushaw attacked them as child “groomers”—a term used to describe someone who gets close to and builds trust with a child or young person with the intent of sexually abusing them.about:blank

In reality, opposition to the law stems from fears that it will contribute to the kind of mental health toll reflected in the Trevor Project survey. According to health experts, when a young person’s gender identity or sexual orientation becomes politicized and/or erased, it can be dehumanizing, lead to poorer academic performance, and cause immense distress—which can make teens more susceptible to substance use, mood disorders, and suicide.

“You don’t have to love the fact that someone is trans or someone is lesbian or gender-nonconforming, but what you should and what you have to do, according to the Constitution and the Declaration of Independence, is recognize the humanity in people.”

Jey’nce Poindexter, case manager at the Ruth Ellis Center and vice president of the Trans Sistas of Color Project

The Florida law’s wording is so vague and subject to interpretation that Kaplan and other legal experts are worried it could extend far beyond limiting instruction to young students, stifling all discussion of LGBTQ topics with all students, including those with gay families. As one Florida-based law professor noted to NBC News, the law is so ambiguously written that it could scare teachers out of teaching about the history of same-sex marriage or the AIDS crisis. Indeed, some teachers have expressed fear about the possibility of being sued.

RELATED: ‘These Policies Do Attack Michigan Families’: Inside Betsy DeVos and the Michigan GOP’s War on Public Schools

By outlawing discussion of LGBTQ identity in classrooms, DeSantis and his allies may be directly increasing the risk of suicide for youths. A 2021 Trevor Project study found that LGBTQ youth who learned about LGBTQ issues or people in classes at school were 23% less likely to attempt suicide in the prior 12 months than those who didn’t learn about them.

Voters Reject Attacks on Teachers and Parents as ‘Groomers’

This rhetoric is “disgusting,” and absolutely devoid of any truth or facts, Kaplan said.

Despite 55% of survey respondents rejecting the “groomer” rhetoric, use of the term and other targeted language has already led to the harassment of teachers and school board members—a situation made more dangerous by the 45% of respondents identifying as Republicans who said that the mere act of supporting discussions about sexual orientation and gender identity in school made someone a “groomer.”

Such a majority of opposition may not prevent Republican politicians from using such rhetoric, however. Just this week, Michigan state Sen. Lana Theis (R-Livingston County) launched a baseless attack on one of her political opponents, fellow state Sen. Mallory McMorrow (D-Oakland County), claiming in a fundraising email that McMorrow was outraged that she “can’t teach, can’t groom and equalize kindergarteners.”

McMorrow pushed back against Theis’ attack in a passionate speech on the Senate floor on Tuesday, calling Theis’ anti-LGBTQ agenda “hollow” and “hateful” and accusing her of scapegoating gay and transgender people for Republicans’ governing failures.

“People who are different are not the reason that our roads are in bad shape after decades of disinvestment or that health care costs are too high, or that teachers are leaving the profession,” McMorrow said. “We cannot let hateful people tell you otherwise to scapegoat and deflect from the fact that they are not doing anything to fix the real issues that impact people’s lives.”

Jey’nce Poindexter is a Black, trans woman living in Detroit, where she’s a case manager at the Ruth Ellis Center and a vice president of the Trans Sistas of Color Project. She similarly believes denigrating gay and trans people as groomers is a “fear-mongering” tactic used to drive a wedge between groups from different communities and backgrounds. But it can also have devastating consequences for members within the LGBTQ community.about:blank

“I think it’s so easy for people to mistreat and demean and disrespect because they refuse to see the humanity in us,” Poindexter said. “You don’t have to love the fact that someone is trans or someone is lesbian or gender-nonconforming, but what you should and what you have to do, according to the Constitution and the Declaration of Independence, is recognize the humanity in people.”

The ‘Party of Family Values’ Proposes Plan That Could Separate Families

Last month, a Texas court temporarily blocked Abbott’s order after a coalition of advocacy groups and the family of a transgender girl filed a lawsuit. However, it could go back into effect after the trial begins in July .

When asked if they would support a similar directive from the governor of their state, 55% of survey respondents—including 75% of Democrats and 61% of Independents—said they would not. However, 59% of Republicans said they would embrace such a policy—a figure that represents the very vocal minority who egg on extremist politicians like Abbott, Craig, and Desantis.

“It really is a cynical political calculation that some of these politicians have made and the sad thing is they don’t give a damn about the harm that they might do to LGBTQ youths or the consequences,” Kaplan said. “It’s all about their short-term political gain, and I find that incredibly sad.”

If you’re a member of LGBTQ community and you’re experiencing crisis, The Trevor Project, Equality Michigan’s Department of Victim Services, the Association of Gay and Lesbian Psychiatrists, Trans Lifeline, and the LGBT National Help Center may be helpful resources.